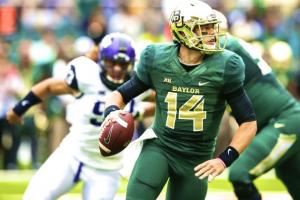 Bryce Petty led Baylor from down 21 against TCU at home to a 61-58 win. (Bleacher Report)

Down in Waco, Baylor and TCU carried on their age-old rivalry dating back to 1910 when the original TCU campus burned down in Waco.  This time, both teams were ranked in the top 10 nationally.  TCU jumped out to a quick 14-0 lead in the 1st quarter, and then with 11:38 to play in the game they were up 58-37.  Then Bryce Petty woke up.  Petty threw 6 TD passes on Saturday including the tying one with 4:42 to go.  Petty totaled up 510 yards in the air with only 2 picks while TCU’s Trevone Boykin totaled 287 yards with no interceptions.  Two things are for certain in this game: Baylor is never out of it, and TCU is legit.

There was a similar game in Lubbock that went unnoticed for the most part thanks to it being two of the lower-tier Big 12 teams pre-season.  Texas Tech jumped out to a 14-3 lead also and late in the game held a 34-20 lead, looking like the Red Raiders would get their first Big 12 win of the year against West Virginia.  The Mountaineers scored twice to tie it 34-34 and Tech could not put anything together offensively to end it.  As time expired, Josh Lambert kicked a career-long 55-yard field goal to give the win to West Virginia, 37-34.  West Virginia could still be in contention for a berth to either the Alamo Bowl or Russell Athletic Bowl, but they have to play Baylor, Oklahoma State, Kansas State and TCU still.  Kliff Kingsbury needs to stop with the Davis Webb experiment and play either Vincent Testaverde (son of former NFL star Vinny Testaverde) or Patrick Mahomes.  Webb is too much of a flat-footed pocket passer to do anything in a Kingsbury system.  Mahomes is extremely athletic and Testaverde has the pedigree.  As of right now, Texas Tech will not make a bowl game this year.

One of two things happened in Lawrence, Kansas, on Saturday.  Either Oklahoma State played flat the whole game, Kansas played out of their minds or a combination of the two.  Regardless of which one it was, the OSU-KU game was much closer than anyone predicted it to be.  At one point Kansas – yes, the same Kansas team that has won one conference game in the last 3 years and doesn’t have a real head coach right now – was leading the Cowboys.  The biggest mistake KU made Saturday was kicking to Tyreek Hill who returned a kickoff 99 yards for a TD in the 4th quarter to win the game 27-20.  The Cowboys need to come out of the gate strong this week or it could make for a long game in Fort Worth.

No. 4 Baylor over West Virginia – The Bears go on the road for an early kick but the high-powered Baylor offense is much more consistent than West Virginia’s.  This game could be a shootout which makes me wish it wasn’t on Fox Sports 1.

No. 11 Oklahoma over. No. 14 Kansas State – The Wildcats head to Norman off of a bye.  While K-State won the last time these two teams met at OU, I’m not sure this year’s team will come off the bye well, something Bill Snyder’s teams are known for doing.  A lot of people are saying that Oklahoma and Trevor Knight are not as good as advertised, but they don’t typically lose at home.  This game is slated for 11 a.m. C.T. on ESPN.

No. 12 TCU over No. 15 Oklahoma State – The Horned Frogs defense showed their youth in letting Baylor score 24 unanswered points to win on Saturday, but the Cowboys area different team.  Oklahoma State has been terrible about feeling teams out this season and struggled on offense against arguably the worst team in the conference on Saturday.  Look for TCU to squib kick a lot and keep it away from Tyreek Hill.  The most intriguing matchup in this game isn’t even a 1-on-1.  It’s the OSU defense and the TCU offense – how can the Pokes contain Trevone Boykin?  Another game that just had to be on Fox Sports 1, this one at 3 p.m. C.T.

Texas Tech over Kansas – It’s tempting to pick Kansas based on their performance against Oklahoma State combined with Texas Tech’s season performance, but I don’t know that it’s smart.  If the Red Raiders lose, Kliff Kingsbury’s seat won’t just be hot, but will likely be engorged in flames.  It’s kind of sad that this is going to serve as a statement game for Tech.  Kick is at 2:30 on Fox Sports Networks.

Texas over Iowa State – Texas is bad this year, but Iowa State is worse.  Such a small number of people are watching that this game is slated for 7 p.m. C.T. on Longhorn Network and Cyclones.TV.  Sam Richardson might win the QB matchup, but that will likely be the lone positive for Iowa State.