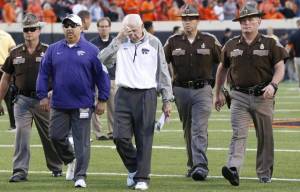 Bill Snyder and Kansas State led all game against Oklahoma State, until the Pokes took a lead midway through the fourth quarter. (Wichita Eagle)

I think it’s safe to say Oklahoma State is a second half team.  In five games, the Cowboys have come from behind in three to win: at Central Michigan, at Texas and home against Kansas State.  The Pokes have struggled to wake up at the start of each game.  However, quarterback Mason Rudolph has looked incredible except for at Texas, especially in the second halves of games.

But, unless the Cowboys start playing four quarters, the latter seven games of this season could be a little rough.  Oklahoma State needs to figure out how to wake up before the game.  Only once have the Pokes done so – Sept. 19, against UTSA.  They didn’t even do it against FCS Central Arkansas.  Don’t get me wrong, the potential on this team despite the end of linebacker Ryan Simmons’ career, is there.  At this point, though, I’m not sure how high they finish.

Baylor proved me wrong last week.  I picked the upset in the BUTT Bowl and, man, was I wrong.  Although, Texas Tech has still showed that they’re lightyears better than last year.  Patrick Mahomes is still a very capable quarterback.  The Red Raiders have yet to peak, too.  The Bears, though, have reached their ceiling.

No. 3 Baylor over Kansas

No. 10 Oklahoma over Texas

West Virginia over No. 21 Oklahoma State

No. 2 TCU over Kansas State 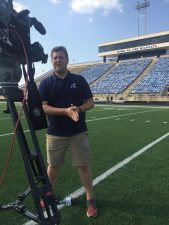