Professional Athletes and Their Affect on Youth Sports 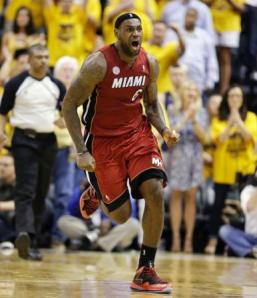 LeBron James reacts to an offensive foul called against him during Game 6 of the 2013 NBA Eastern Conference Finals against the Indiana Pacers.

While officiating a High School Varsity Basketball Tournament in Agra, Okla. in early December, my partner and I made an observation.  Many players attempted the NBA-popularized “Euro Step,” but unsuccessfully did so and we would in turn, call them for a traveling violation.  My partner referred to it as “the Thunder Effect.”

He continued to talk about how he noticed the style of play in Oklahoma, especially in the boys game, change to more resemble the NBA after the Seattle SuperSonics moved to Oklahoma City in time for the 2008-09 season.  The NBA has fallen under scrutiny for several things, including the large amount of travels that go uncalled.  I once watched a playoff game where former Celtics Forward Kevin Garnett took 4 steps and dunked after picking up his dribble.  No whistle.

Now, in High School Basketball, more and more players are even mimicking NBA star egos.  Remember Game 6 of the 2013 Eastern Conference Finals featuring the Miami Heat at the Indiana Pacers?  LeBron James was called for an offensive foul and rightfully so.  He proceeded to sprint the length of the basketball court in protest, on national television.  I personally wish James would accept the fact that he is currently the best basketball player in the world and cut out the whining and crying. (Click here for a story on Game 6)

Many current high school players are even behaving in similar manners.  In the same game I mentioned earlier, I called an offensive foul.  The player who drew the foul got up and bodied up to the offensive player, leaving me no choice but to issue a technical foul.

There are similar cases in other sports such as football and baseball.  This serves as a sports example of the trickle-down effect.